Football clubs, how to stop your big summer transfer signing crashing your website

With the transfer window in full swing and transfer deadline day fast approaching, we look at what football clubs can do to stop major announcements making their websites unavailable. 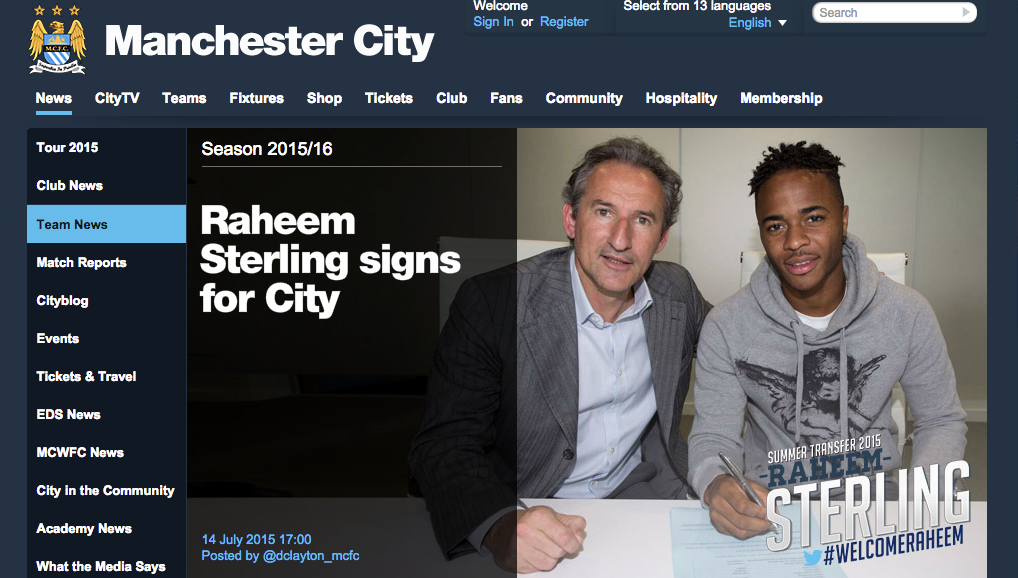 It was the biggest Premier League transfer of the summer transfer window to date. Raheem Sterling’s £49m move from Liverpool to Manchester City created quite a stir - and City’s website appeared unable to cope with that.

The City website was briefly unavailable as traffic surged to read official confirmation of Sterling’s arrival. Meanwhile, playing up to their reputation of being old hands at being a big club, neighbours Manchester United’s website appeared unflustered by the arrivals of Bastian Schweinsteiger, Morgan Schneiderlin and Matteo Darmian in quick succession.

So, what can a football club to to prevent a big summer transfer signing causing a reputation-damaging website crash?

The biggest factor in ensuring your website is scalable. That will ensure the site can cope when you make your big deadline day signing, while also making sure you’re not eating into your transfer budget by paying for capacity you don’t use all the time.

To get the sort of security you're likely to want coupled with that scalability, a private cloud hosting option might be the most appropriate choice.

Get the right infrastructure

It is important that the underlying infrastructure is in place to cope with demand, regardless of whether that demand is planned and expected or unplanned and unexpected.

So, even if you’re languishing in League Two, it is worth having the infrastructure in place to avoid embarrassing outages when the petrodollars arrive and millions of people do want to visit your website simultaneously.

Host versions of the site in popular overseas markets

Has your club been on a money-spinning pre-season tour or been working on commercial tie-ins outside the UK? If your fanbase is big in different countries, it is worth having servers located in those territories to serve versions of your website closer to the end users.

This will result in a better user experience for your fans in those countries and alleviate the strain on your server’s resources caused by traffic flying halfway round the world.

A content delivery network (CDN) can be used to host photos of your new signing wearing the new home kit or holding a scarf above his head, plus other assets on the page.

This means your server only has to load the remainder of the page and not resource-draining media.

A caching tool will take pages or individual assets of your website and create static versions of them, which load much more quickly than standard, dynamic pages. This can lead to 20-times better performance from your server.

Ideally, the infrastructure we’re talking about should be put in place from the design phase of your website, not just when the new signing is about to arrive. Giving consideration to site performance and how large scale traffic can be managed early on in the project results in greater flexibility and easier scaling further down the line.

Again, the means planning for breaking your club transfer record at the point of designing your new website, even if that seems like a distant prospect at the time.

Learn more about improving the performance of high traffic websites.